Prepped and into the oven…

Introduction: It is thought that Norwich has long a connection with canaries from the 15th and 16th centuries when Flemish weavers imported the birds to East Anglia from the Dutch colonies in the Caribbean.

Away kit: 4 plates, knives and forks

Method: Preheat the oven to 200oC

Grease the six cups with butter.  Now beat the butter in the bowl to a cream, add the sugar, one egg and half the flour and a little more beating.  Beat in the other egg and the remaining flour and finally the baking powder.

Put the mixture into the cups and pop them in the oven (perhaps on a tray) for 10 minutes.

Serve with lemon curd or jam. 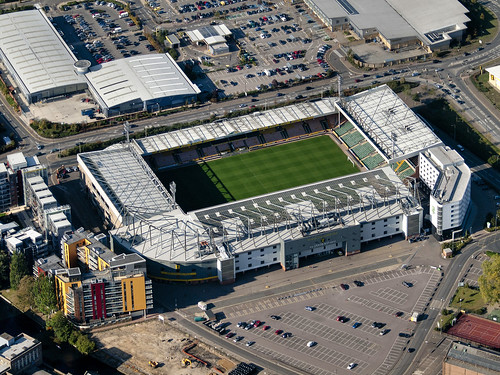 Introduction: Carrow Road is Norwich City’s kickball stadium.  It’s named after the road it was built on in 1935. Norwich used to play at the appropriately named Nest on the Newmarket Road before that.

I’m looking to discover how a proper Norfolk turkey is cooked. I have asked my Mum how to do this but she has not been forthcoming thus far. Perhaps she will remember how her Mum did it, she was REALLY good at cooking.

Cooking time: 25 mins per kilo and a 30 min finishing blast

Away kit: 4-6 plates and spoons

Method: preheat the oven to 180oC

Pat the turkey dry all over with kitchen paper. Mix the butter with the garlic and season well.

Gently push your fingers under the turkey’s skin, starting from the neck end of the bird, easing the skin away from the flesh. Spread the garlic butter under the skin on each breast then smooth the skin back into place.  Now slip the slices of Canary Yellow lemon up under the skin. Rub the turkey all over with olive oil and sprinkle generously with sea salt.

Put the halved onions in the bottom of the roasting tin to act as a trivet for the bird. Sit the turkey upside down in its breast so the juices from the back and legs keep it moist and cover generously with foil leaving plenty space around your bird, tucking under the tin to create a foil tent, an oven within an oven.

Cook for your calculated time, say 1 hour 40 mins for a 4kg bird.

Rest the turkey, covered loosely with foil, for at least 30 minutes and up to an hour before serving (strain the cooking juices and keep the onions to use in the gravy).

Stick the cooked bird on the carving board and spear it with the carving fork on one side of the breast bone, taking care to disturb the meat as little as possible.

Using some kitchen roll bend the thigh outwards and cut through the hip joint removing the whole leg. Separate the thigh from the drumstick and stick on the serving plate. Repeat for the other leg.

Cut through the corner of the breast towards the wing. Again using kitchen roll wiggle the wing to locate the joint. Cut through the wing joint with a slice of breast. Place on the serving platter, someone will like it.

Your bird should still be speared near the breast bone. Steady your bird. Carve the first slice off where you’d imagine the nipple to be if it were a breast. Keep the meat together by lifting each slice with the knife and fork rather than letting it fall. It should all be piling up on the serving plate by now. Niiice.

My wife Sheils is a Norwich City supporter and, at the beginning of the 2012 – 2013 kickball season I decided to make her a dish that reflected her team.  I created Canary Rice.  Personally I love the taste of simple rice and peas, I have done since eating it in a Caribbean cafe somewhere.  That recipe was was not yellow, this one is…

Introduction: Norwich City FC are probably called “The Canaries” because they used to play at a disused chalk pit on the Newmarket Road called “The Nest” and the club’s chairman at the time (a keen breeder of canaries) dubbed them “The Canaries” while they were there in 1907. He also changed their strip to yellow and green. Their original nickname was “The Citizens”.

Away kit: 2 bowls and 2 spoons

Method: preheat the oven to 90oC

Wash the rice in at least 4 changes of water. Stick the water, rice, turmeric and salt into the saucepan. Bring to the boil, stir once, then lower the heat, cover with the tight fitting lid and simmer for 20 mins.

N.B. If you don’t have a saucepan with a tight fitting lid wrap up the lid in silver foil, that’ll make it fit!

Second half – put the bowls in the oven to warm

Sprinkle the cup of peas on the surface of the almost cooked rice close the lid and simmer for another 5 mins. Mix up the peas and the rice, scraping up the nutty bits from the bottom of the pan, leave to stand for 5 minutes.

Serve in the warmed bowls.  Sheils likes a sprinkling of soy sauce too, but I don’t think that’s necessary.